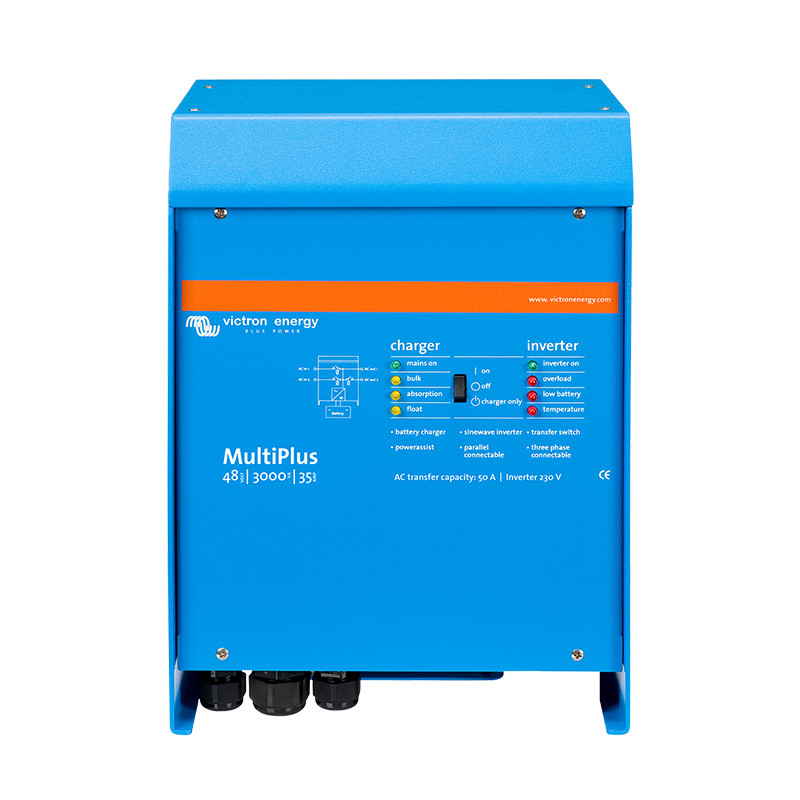 Photos are for informational purposes only. View product specification

Multi-functional, with intelligent power management
The MultiPlus is a powerful true sine wave inverter, a sophisticated battery charger that features adaptive charge technology, and a high-speed AC transfer switch in a single compact enclosure. Next to these primary functions, the MultiPlus has several advanced features, as outlined below.

Two AC Outputs
The main output has no-break functionality. The MultiPlus takes over the supply to the connected loads in the event of a grid failure or when shore/generator power is disconnected. This happens so fast (less than 20 milliseconds) that computers and other electronic equipment will continue to operate without disruption. The second output is live only when AC is available on one of the inputs of the MultiPlus. Loads that should not discharge the battery, like a water heater for example, can be connected to this output (second output available on models rated at 3kVA and more).

Virtually unlimited power thanks to parallel operation
Up to 6 Multi's can operate in parallel to achieve higher power output. Six 24/5000/120 units, for example, will provide 25 kW / 30 kVA output power with 720 Amps charging capacity.

Three phase capability
In addition to parallel connection, three units of the same model can be configured for three-phase output. But that’s not all: up to 6 sets of three units can be parallel connected for a huge 75 kW / 90 kVA inverterand more than 2000 Amps charging capacity.

PowerAssist - Boosting the capacity of shore or generator power
This feature takes the principle of PowerControl toa further dimension. It allows the MultiPlus to supplement the capacity of the alternative source. Where peak power is so often required only for a limited period,the MultiPlus will make sure that insufficient shore orgenerator power is immediately compensated for by power from the battery. When the load reduces, the spare power is used to recharge the battery.

Four stage adaptive charger and dual bank battery charging
The main output provides a powerful charge to the battery system by means of advanced ‘adaptive charge’ software. The software fine-tunes the three stage automatic process to suit the condition of the battery, and adds a fourth stage for long periods of float charging. The adaptive charge process is described in more detail on the Phoenix Charger datasheet and on our website,under Technical Information. In addition to this, the MultiPlus will charge a second battery using an independent trickle charge output intended for a main engine or generator starter battery (trickle charge output available on 12V and 24V models only).

System configuring has never been easier
After installation, the MultiPlus is ready to go. If settings have to be changed, this can be done in amatter of minutes with a new DIP switch setting procedure. Even parallel and 3-phase operation can be programmed with DIP switches: no computer needed!
Alternatively, VE.Net can be used instead of the DIP switches.
And sophisticated software (VE.Bus Quick Configure and VE.Bus System Configurator) is available to configure several new, advanced, features.